Originality is a rare commodity in these media-dominated, cynical times, but every now and then a band comes along that produces music of such mind-bending brilliance that only the culturally blind could fail to recognize. Extreme metal, a genre that has produced a high proportion of rock’s most distinctive voices in recent years, may not have as yet fully infiltrated the mainstream, but a major breakthrough seems at hand. The vanguard for that movement is Sweden’s mighty Opeth, the essential metal band of the 21st century, who between their sixth and seventh releases, Deliverance and Damnation, respectively, have torn down the genre’s walls and freed it to be cast in a whole new light.

Opeth began their inexorable rise in Stockholm, way back in the late 80s when the then teenaged Mikael Akerfeldt was asked to contribute bass guitar to a fledgling incarnation of the band by its founder member, David Isberg. Isberg eventually abandoned the band altogether, leaving Akerfeldt both the band’s name and the task of picking up the creative pieces. This he did, eventually recruiting what is now acknowledged as the first, real line-up of the band: Akerfeldt himself on guitar and vocals, Stefan Guteklint on bass guitar, Anders Nordin on drums and Peter Lindgren on guitar.

Even at this early stage, Opeth were developing a sound entirely of their own; a darkly progressive combination of death metal and more subtle, melodic and acoustic elements that manifested itself in lengthy and elaborate songs that exuded imagination, invention and class.

It all came very naturally, says Akerfeldt. We never set out to be different from everyone else. This was just the music we came up with when all our influences came together.

Unable to afford expensive studio time, the young quartet began to record their rehearsals, treating them as rudimentary demo tapes to distribute among their friends and other intrigued parties. Early in 1993, one of these demo tapes reached the ears of Candlelight Records then label boss Lee Barrett, who immediately recognized that there was something special about Opeth and quickly offered the band a three-album deal. Not surprisingly, the band accepted the offer and, after giving Guteklint the boot late in 93 and replacing him with session bassist Johan De Farfalla, they set about recording their debut album, 1994’s epic and elegant Orchid, which instantly gained the band a cult following. Nearly ten years on, the album still stands up as a remarkably mature and groundbreaking piece of adventurous extremity, with tracks like Under The Weeping Moon and The Twilight Is My Robe continuing to sound ahead of their time. It was a prodigious debut, indeed.

Eager to capitalize on the minor but promising success of their debut, Opeth travelled to the UK in the Spring of 1995 to perform two gigs, one of which was a large event at London’s Astoria venue that also featured Finnish black metal punks Impaled Nazarene. On their return to Stockholm, the band began writing Morningrise, their sophomore set, which would eventually be recorded in the Spring of 1996. Prior to the album’s release, the band made a second trip to the UK for gigs with Morbid Angel and The Blood Divine. When Morningrise finally emerged later that year, it received a rapturous response from metal fans and critics alike, earning the band countless plaudits and the opportunity to tour Europe with British black metal gods Cradle Of Filth.

By the time the band came to record their third album, only Akerfeldt and Peter Lindgren remained from the line-up that produced Orchid and Morningrise. Between 1996 and 1998, the duo went on the hunt for a suitably skilled rhythm section to compliment their staggering array of monstrous riffs and exquisite melodies.

Mikael Akerfeldt: Our drummer quit the band after two records and the bass player was kicked out. But we made some adverts for a new drummer, saying We’re going to be a big band. You’d be a fool to miss this. You’re gonna be famous! We figured that because we’d put out two albums and they’d both been well received, we’d get lots of replies. But someone had taken down all the adverts.

That someone turned out to be Uruguayan-born drummer Martin Lopez, who, already a huge fan of Opeth and recently relocated to Sweden, was taking no chances in allowing others a shot at this opportunity. Lopez, formerly the Amon Amarth skinsman, was welcomed into the Opeth fold in 1997 and made his first contribution to the band’s music on their cover of the Iron Maiden classic Remember Tomorrow. Aside from the newfound strength of his thunderous drumming, Lopez soon presented another gift to the band in the form of his best friend, Martin Mendez, an enormously talented bassist, who completed the Opeth line-up that remains in tact to this day. The quartet’s first album together, 1998’s My Arms, Your Hearse, with a darker and more aggressive tone than its predecessors, was immediately hailed as another benchmark in extreme metal the band’s third in a row compounded their reputation as the genre’s most compelling attraction.

Their contract with Candlelight over, Opeth’s next album, 1999’s Still Life, was snapped up by legendary UK metal label Peaceville. Beautifully produced and without doubt the band’s strongest work up to that point, it became the most successful of Opeth’s first four releases, not least due to Peaceville’s links with Music For Nations Records. When the two labels went their separate ways a year later, Opeth remained with MFN and started work on what would become their first major breakthrough into mainstream territory.

With studio assistance from Steven Wilson, creative mastermind behind eccentric UK proggers Porcupine Tree, the elegiac and breath-taking masterpiece that is Blackwater Park was recorded in Gothenburg in 2000. Released the following year to universal acclaim, the album went on to sell four times as many copies as its predecessor and introduced Opeth to a huge worldwide audience. For only the third time, the band embarked on a major tour, hitting various major rock festivals in Europe and crossing the United States for the first time with the likes of Amorphis and Nevermore.

In a typically obtuse move, arguably designed to confuse the f**k out of audience and record company alike, Opeth decided to follow-up the huge success of Blackwater Park by recording two new albums. Despite the fact that the band had the same amount of time in the studio that they would normally have to record a single album, they emerged from a frankly nightmarish stint in the studio ( Not something we would ever do again. It was a shitty experience! states Akerfeldt) with the brutal and black-hearted Deliverance album and its astonishingly beautiful companion-piece, Damnation.

The first of these albums again garnered the band fistfuls of positive reviews and won them the 2003 Swedish Grammy Award for Best Rock/Metal Act. Another batch of gigs re-established Opeth as firm favourites on the European live circuit, particularly in the UK where their shows are now routinely sold out. Arguably their heaviest and most intense album to date, Deliverance still contained moments of fragile grace and delicate aural poetry and again showcased the incredible vocal talents of Mikael Akerfeldt: from ethereal whisper to neo-demonic roar, his voice is one of the current metal scene’s most justly revered treasures.

And, on the magnificent Damnation, the true beauty of this voice can at last be heard in its full glory. A startlingly mellow and melodic affair, Damnation provides the brilliant light to the choking darkness of Deliverance. Influenced by the progressive and classic rock sounds of the 1970s, but executed with true 21st century spirit and finesse, it is perhaps their most groundbreaking effort to date. Eschewing the crushing riffs of their previous six albums, these heavenly lullabies are as gorgeous and affecting as anything in rock’s illustrious past. With more live shows including some special shows focusing on the mellow side of their back catalogue Opeth look set to conquer the world all over again in 2004. Be prepared to be completely swept away. 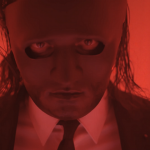