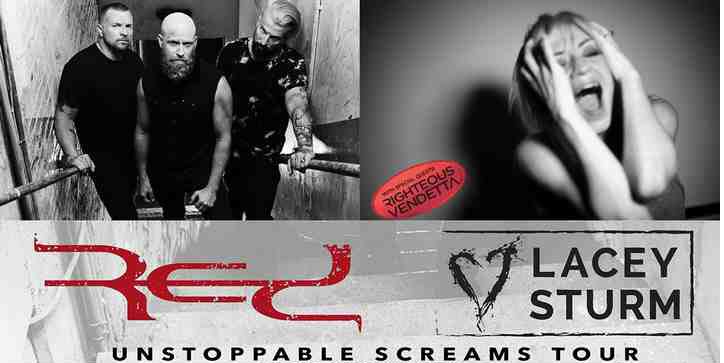 “Unstoppable” is a high energy, high vibe, power driving Sia cover from Red’s Gone album. Released on October 27, 2017, Gone peaked as the #1 album on Billboard’s Top Christian Albums chart. Other notable tracks from the album are “Still Alive” and “Losing It”.

“Life Screams” from Lacey Sturm’s album, Life Screams, is a beautiful, stirring, slow rock ballad seemingly written as a love song from the perspective of “life” to the listener. This Lacey Sturm debut album has been received well, peaking at #1 on Billboard’s Top Hard Rock Album and #3 on Billboard’s Top US Independent Album charts. Harder songs from this album include “Rot” and “Impossible”.

Fun fact: In 2017 Lacey played with The Stowaways on ShipRocked. She has announced that she’ll have her own little stowaway on this tour.

The bands are touring in support of Gone and Life Screams. The tour begins in Columbus, Ohio, snaking through the Midwest down to the South where it ends in Atlanta, Georgia. The show in Flint, Michigan has already sold out.