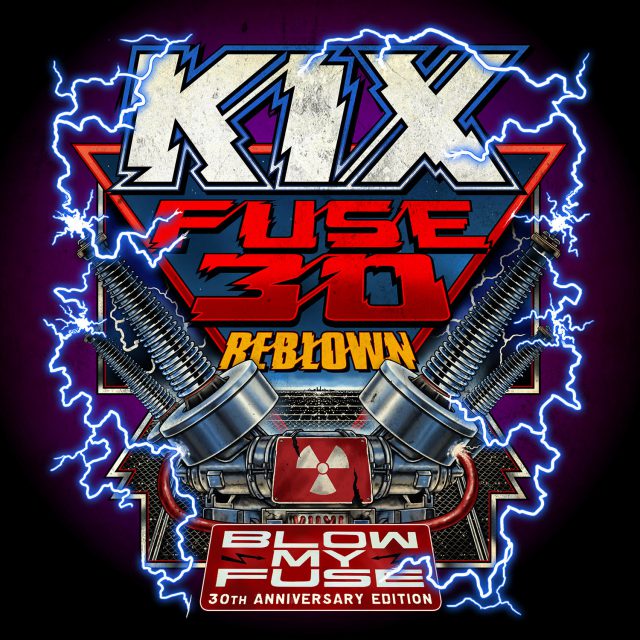 KIX will release Fuse 30 Reblown – 30th Anniversary Special Edition two-disc set on September 21, 2018, exclusively through PledgeMusic, on the 30th Anniversary of their platinum album Blow My Fuse.  Fuse 30 Reblown is available for pre-order now through the band’s PledgeMusic store, where fans can also purchase special  commemorative merchandise including signed copies of the album, t-shirts, beach towels, autographed memorabilia, and more.

Fuse 30 Reblown Disc 1 features a raw and impactful remix by Beau Hill (Alice Cooper, Ratt, Warrant, KIX) of KIX’s Atlantic Records album Blow My Fuse, and a top-notch mastering job by Jay Frigoletto (Alice in Chains, Tesla). Never-before-released demos of all 10 tracks, recorded in the early to mid 1980’s, are on Disc 2 and prove how well-prepared KIX were prior to entering the studio to record their albums.

The album Blow My Fuse,  originally released September 19, 1988, features the group’s biggest hit, the power ballad, “Don’t Close Your Eyes,” which reached #11 on the Billboard Hot 100 in early 1989. The album achieved platinum sales and peaked at #46 on the Billboard Top 200, making it the band’s most successful of their 35-year career.

“We are proud to be celebrating the 30-year anniversary of the biggest album of our lives,” says singer Steve Whiteman.  “We went from clubs to arenas, a van to a tour bus, and from the U.S. to Japan and Europe. And 30 years later, our fans are still right here with us.”

KIX will be playing select shows for the rest of the year and as part of the 30th anniversary celebration of the album, the band is performing the entire Blow My Fuse album from beginning to end at all of their live shows.  All tour dates can be found on the band’s website and below.