The 12th annual Rock On The Range returns with its most power-packed lineup to date. America’s largest and most acclaimed rock festival features nearly 60 bands on three stages, led by Tool, Avenged Sevenfold, and Alice In Chains, also featuring Godsmack, A Perfect Circle, Stone Sour, Breaking Benjamin, Three Days Grace, Stone Temple Pilots, Machine Gun Kelly, The Used, Bullet For My Valentine, Black Veil Brides, and many more. Many of the biggest names in rock will be joined by some of rock’s most exciting up-and-coming talent such as Greta Van Fleet, Code Orange, Power Trip, and New Years Day.

Rock On The Range also showcases rock’s favorite comedians in the ROTR Rolling Rock Comedy Tent, and the festival includes various onsite experiences during the three-day weekend. The comedy lineup will be announced in early 2018. Rock On The Range continues to grow year after year and draws attendees from around the world. 2017 was the festival’s biggest year to date with a crowd of 135,000 in attendance; tickets sold out just a month after going sale, marking the festival’s fifth consecutive advance sell-out.

Rock On The Range General Admission and VIP tickets (including layaway options), as well as Hotel and Camping Packages, are on sale now at www.RockOnTheRange.com. Fans are encouraged to buy early and save. Each ticket price level has a limited number of tickets available, so attendees can save more by buying earlier. Ticket prices will automatically move to the next price level once an allotment sells out. The ROTR layaway option also allows purchasers to split the ticket cost into four monthly payments.

M. Shadows of Avenged Sevenfold said, “Rock On The Range is the undisputed champion of American rock festivals. The team over there has done an incredible job of curating a potent mix of all the types of rock ’n roll that any fan could ask for. It’s an honor to play at the top of the bill, and we cannot wait to see everyone in May.”

“We are looking forward to returning to Rock On The Range as a headliner this year and rocking out with all of you. Bring It!” said Jerry Cantrell of Alice In Chains.

“Following last year’s amazing festival we knew we had to deliver. We have one of the only shows from Tool in 2018, a band the Rangers have been wanting for years — and also having A Perfect Circle on the same festival is something special. Adding Avenged Sevenfold, Alice In Chains, Godsmack, and the special returns of Stone Sour and Stone Temple Pilots only builds on that excitement. We can’t wait for May,” said Gary Spivack, Executive Producer for Rock On The Range.

The Diehard Ranger, Ultimate Ranger, and Xtreme Ranger premier packages, as well as the basic GA Camping packages, are currently SOLD OUT.

Specially priced tickets for Rock On The Range will be available for active military through ROTR partner GovX (www.govx.com) while supplies last.

Rock On The Range is produced by AEG Presents and Danny Wimmer Presents and brought to you in part by Monster Energy. 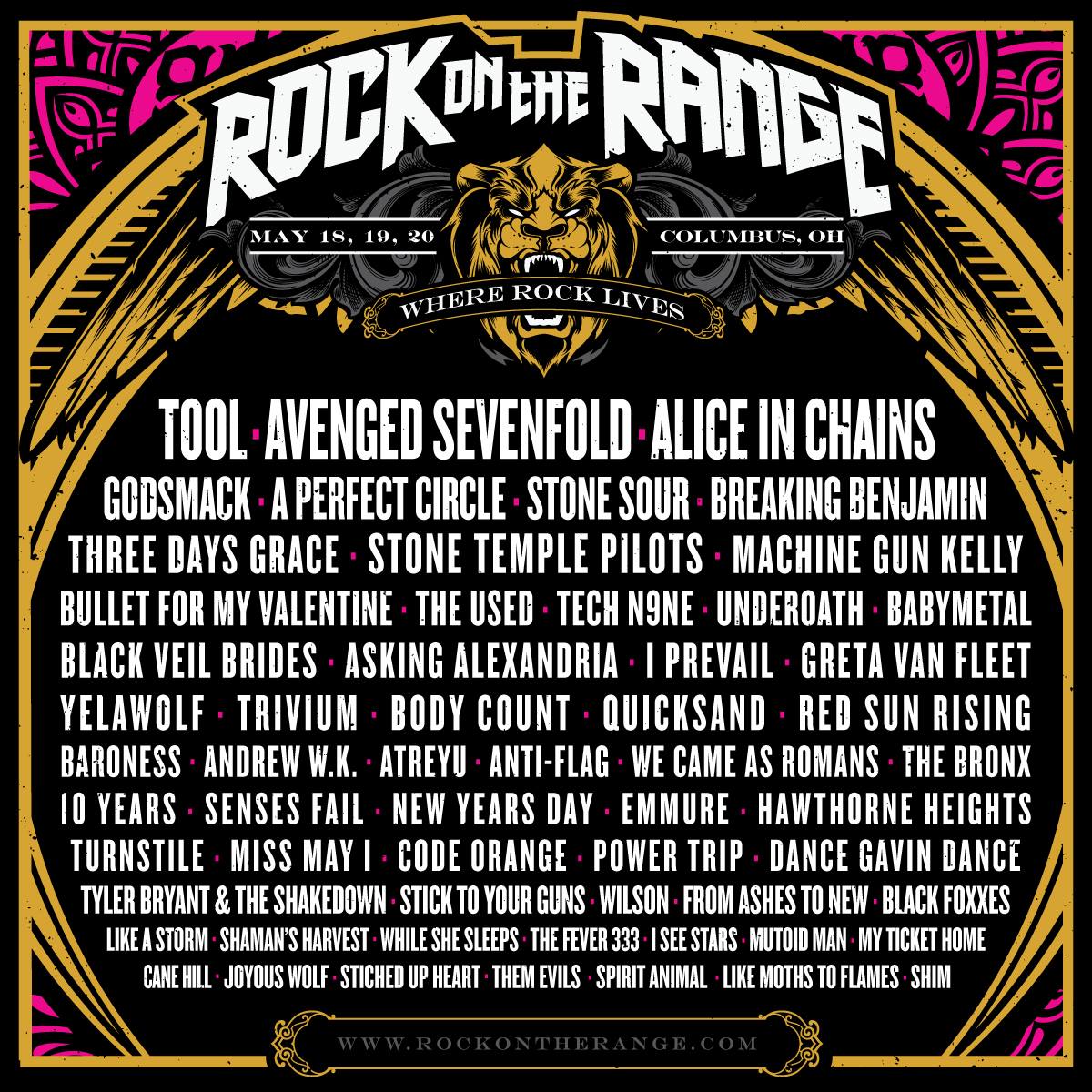 AEG Presents is one of the largest live music companies in the world. The company is dedicated to all aspects of live contemporary music performances, including producing and promoting global and regional concert tours, music events and world-renowned festivals. AEG Presents operates in North America, Europe and Asia through 16 regional offices that support its tours, which include such artists as Taylor Swift, Paul McCartney, The Rolling Stones, Justin Bieber, Katy Perry and Kenny Chesney; produces or supports over 25 music festivals, including the iconic Coachella Valley Music & Arts Festival; and owns, manages or books more than 60 clubs and theaters. AEG Presents produces more than 8,000 shows annually worldwide and conducts business under such globally renowned brands as AEG Presents, Goldenvoice, Concerts West, Messina Touring Group, Marshall Arts LTD, and Madison House Presents.

Since 1993, music industry veteran Danny Wimmer has been producing concerts and festivals, both large and small. In 2011, he formed Danny Wimmer Presents, which now produces several of the largest rock and alternative festivals in the U.S. By combining A-list talent with local cuisine and culture, DWP has become recognized within the industry for delivering the highest-quality entertainment experiences to fans, artists, sponsors, partners and host cities. DWP creates memorable and all-encompassing festival experiences, leaving both consumers and partners with lasting and meaningful impressions. DWP will continue to add new music festivals to its already stellar portfolio, which includes Rock On The Range, Monster Energy Aftershock, Monster Energy Welcome To Rockville, Monster Energy Carolina Rebellion, Louder Than Life, Bourbon & Beyond, Monster Energy Rock Allegiance, Chicago Open Air, and Northern Invasion, among others.