Israel born and LA based heavy rock artist OHP (OREN HALMUT) is at it again, this time taking the 2019, Tones and I Australian hit pop single “Dance Monkey,” injecting it with massive guitar riffs and thunderous percussion, giving it an infectious metal edge!

“Was time to get this monkey moshing ” – OHP 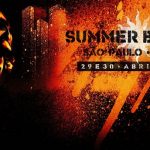