“We’re absolutely ecstatic to be working with Jake,” Said MFR vocalist Aaron Howell. “It’s a match made in heaven…or hell….whichever one is better.”

Artist Jake Fairly, “Do you ever feel like you’re the exact right person for the job? Well that’s how I feel about working on The Front Lines of Good Times with MF Ruckus. The book combines my favorite things; rock and roll and comics.”

About The Front Lines of Good Times:
The Front Lines of Good Times is set in the not-so-distant pre-apocalyptic future. The year is 2040. A near-extinction event known as “The great dying” has wiped out two-thirds of the Earth’s population through a long, drawn out series of seemingly unrelated causes. Organized governments and religions around the world have dissolved giving way to new systems of rule and worship, some of which are quite dark and destructive. Such is the case in the United States where a military Junta has felled the democratic republic in place of a harsh and brutal fascist regime known as the New Order of Fundamentalist Utilitarian Nationalists (NOFUN for short).
https://mfruckus.bigcartel.com/category/comics
https://youtu.be/CLbSRTnxN8k
https://www.patreon.com/MFRuckus

About MF Ruckus:
When MF Ruckus hits the stage, a nexus in the universe forms, creating a place where all is in perfect harmony, war ceases, poverty becomes abundance and all the starving children of the world dance and sing. MF Ruckus is a turbocharged Rock n Roll supergroup comprised from salvaged and Frenkensteined pieces of Denver and Chicago’s most legendary unknown bands to create a 5 headed rockstrosity which is known as “Motherfucking Ruckus” or MF RUCKUS for use in polite company.
https://www.mfruckus.com/
https://www.facebook.com/mfruckusband/
https://www.instagram.com/mfruckus/ 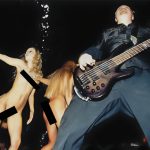