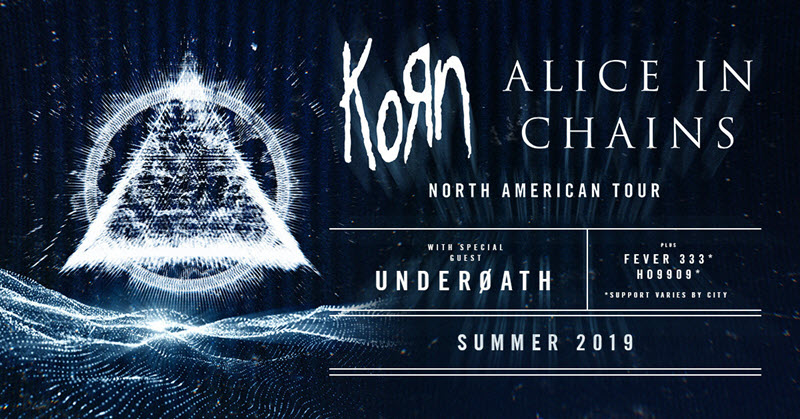 The Korn and Alice In Chains tour will hit amphitheaters across North America this summer with special guests Underoath on all dates, with Ho99o9 and Fever 333 opening on select dates. The tour kicks off July 18th at Austin360 Amphitheatre.  Tickets go on sale to the general public March 1 at 10 am local time at livenation.com.

Since forming, Korn has sold nearly 40 million albums, collected two Grammys, toured the world countless times, and set many records in the process that will likely never be surpassed. Vocalist Jonathan Davis, guitarists James “Munky” Shaffer and Brian “Head” Welch, bassist Reginald “Fieldy” Arvizu, and drummer Ray Luzier, have continued to push the limits of the rock, alternative and metal genres, while remaining a pillar of influence for legions of fans and generations of artists around the globe.  Korn’s most recent LP, 2016’s The Serenity of Suffering, built upon the band’s remarkable history with a return to the dual-guitar dynamic that first fueled their music, and earned the group their 10th GRAMMY® nomination.  Korn are currently in the studio finishing up work on their widely anticipated follow-up to The Serenity of Suffering, which will be released later this year.

Alice In Chains are touring in support of Rainer Fog, which hit No. 1 across Billboard’s Rock, Alternative and Hard Music Charts and No. 1 on the iTunes Rock Album Chart and earned them a Grammy nod for “Best Rock Album.” Over the course of their remarkable career, Alice In Chains (vocalist/guitarist Jerry Cantrell, drummer Sean Kinney, bassist Mike Inez and vocalist/guitarist William DuVall) have garnered multiple Grammy nominations, sold more than 30 million albums worldwide, and amassed a diehard international fanbase whose members number in the millions.

Their discography features some of the biggest and most important albums in rock history, including 1992’s quadruple-platinum-certified Dirt, 1994’s triple-platinum-certified EP Jar of Flies, which was the first EP in music history to debut at No. 1 on the Billboard Top 200 and 1995’s self-titled double-platinum-certified Alice In Chains, which also entered the Billboard Top 200 at No. 1. They returned in grand style in 2009 with the critically acclaimed Black Gives Way To Blue, which hit No. 1 across the rock and alternative charts, earned a Grammy nomination, was certified Gold and hailed by Vice as “a record that’s as powerful as anything the band has done.” Alice In Chains remains one of the most successful and influential American rock bands of all time.

Underoath released Erase Me, their first album in eight years, via Fearless Records in 2018. The band notched a Grammy nomination in the Best Metal Performance category for “On My Teeth” and spent most of the year on the road in support of the album — playing countless sold-out headline shows and headlining their first-ever arena show in their Tampahometown. Ultimately, Erase Me represents a watershed moment for the gold-selling heavy music luminaries whose inescapable influence can be felt in nearly every corner of hard rock. The album crashed the Billboard Top Hard Rock Albums Chart at #1. It sees the band refine its trend-setting but inimitable style with heavy intensity and hypnotic hooks coursing through songs, like the aforementioned “On My Teeth,” “Rapture,” “Wake Me,” and the Top 15 active rock single “ihateit,” which have cumulatively tallied over 16 million streams in a few months’ time. Underoath will spend the spring playing arenas with Breaking Benjamin.

theOGM (Jean) & Yeti Bones (Eaddy) are certainly a product of their early environment. There weren’t any fields or even much grass for a kid to play on. Gardens were made of concrete and a reality sustained only by dreams of places where the train tracks went. Born to lose in Jersey, reborn in NYC and subsequently reimagined 999. Rewired to spread a promise for the next emancipation from time. The gospel, the vibration, hardcore punk, rage and rhyme – theOGM and Yeti Bones emerge transformed into weapons of mass expression and the spectacle known today only as Ho99o9 (horror). Then just like that, Ho99o9 vanished from the east coast, allegedly recruited into a beat laboratory in Los Angeles. A congregation gathered in a scene of like-minded mutants and L.A. quickly became the HQ of Ho99o9. And Today – a new nation rises to smash the guise of the god-head. A deity-less religion of our collective humanity, neither divine, nor wicked, led only by the march of the Deathkult and delivered by its soldiers – theOGM and Yeti Bones in their United States of Horror

Comprised of vocalist Jason Aalon Butler, drummer Aric Improta, and guitarist Stephen Harrison, GRAMMY nominated Fever 333 released their debut LP, Strength in Num333rs earlier this year. Recently profiled by The Los Angeles Times, who championed Fever 333’s “activist, rap-rock spirit,” and named one of 17 Alternative & Indie Breakouts For 2019 by Billboard, Strength in Num333rs  comes on the heels of the group’s politically charged, breakthrough EP, Made In America.  The collection is highlighted by the EP’s title track and the Top 10 Rock Radio track “Walking In My Shoes.” Explicitly devoted to a revolutionary cause and delivering aggressive advocacy through a molotov cocktail of punk, hip-hop, and thrash, Fever 333’s activism serves as the banner for the band’s focus on community, charity, and change.