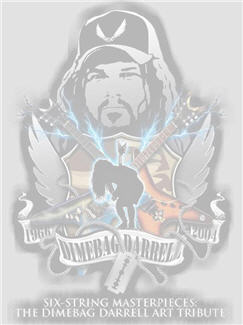 Dimebag Darrell Abbott’s induction to Guitar Center Hollywood RockWalk will be held Thursday, May 17 in Hollywood. Many of rock’s top players will be in attendance to honor our lost and beloved brother. Zakk Wylde will perform In This River live on Sunset Blvd. – a song forever dedicated to Dimebag Darrell. According to Wylde, the song will never leave the set list for Black Label Society. The action then moves to the House of Blues Hollywood to honor Dimebag Darrell Abbott where The Six String Masterpiece Auction will be held to benefit The Little Kids Rock Foundation. Dimebag’s Black Tooth Bash will immediately follow the auction with special performances comprised with some of Darrell’s closest friends and influences.

Hollywood RockWalk at the Hollywood Guitar Center on Sunset Blvd on May 17, 2007. The induction begins at 12:00 noon with many of Dimebag’s friends to speak and others who will come together to honor their brother.

Dimebag Darrell Abbott was loved by all and a hero to many. His unexpected departure from our world has been a great loss, yet he left us a legacy that will continue forever. It is a legacy to his family, friends and fans of the great music that he loved to perform as well as his crazy, charismatic sense of humor that touched many.

The night will start out with ring-master Jamey Jasta of Hatebreed and Headbanger’s Ball leading us into the 3-ring circus in honor of Dimebag Darrell Abbott and his induction. Jasta opens the night with introducing to the masses the L.A Chapter of the Little Kids Rock. The kids will rock out and show you how a little love from us can help change the lives of these gifted kids that would not normally have the chance to learn and play instruments.

SIX-STRING MASTERPIECES: THE DIMEBAG DARRELL ART TRIBUTE is a collection of over 60 DEAN ML guitars that have been hand-painted by world-famous Rock Stars and internationally known Tattoo & Visionary Artists in a memorial tribute to one of the greatest guitarists of all time, Dimebag Darrell Abbott. The guitars can be viewed prior to the auction May 4th to May 16th at LaLuz DeJesus Gallery in L.A. (4633 Hollywood Ave).

The Little Kids Rock Foundation (501C3) is the charity of choice for Dimebag Darrell so it’s Dime-Time folks and we are going to rock the house to honor Dimebag and raise money for the kids!