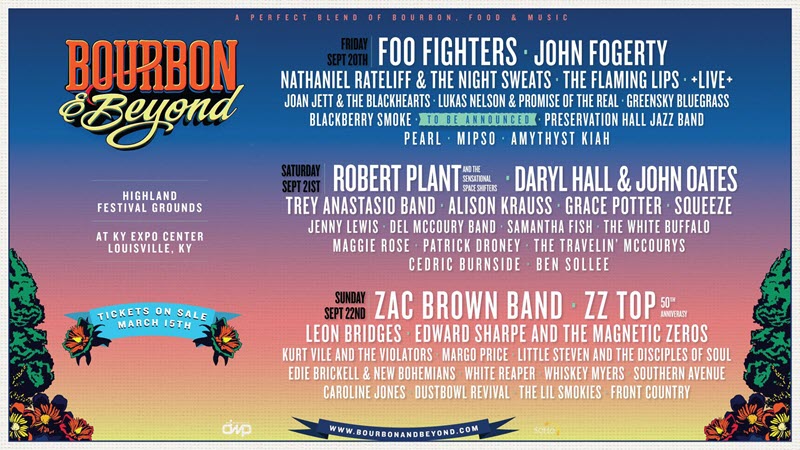 Bourbon & Beyond will make its anticipated return to Louisville, KY September 20 – 22, 2019 at the new Highland Festival Grounds At KY Expo Center. In addition to an unforgettable lineup of bourbon and chefs, music performers include a unique mix of rock, roots, bluegrass and folk acts headlined by Foo Fighters, Robert Plant And The Sensational Space Shifters and the Zac Brown Band.   Bourbon & Beyond exclusive VIP packages, General Admission tickets, camping and hotel packages, as well as special event tickets, go on sale Friday, March 15 at 12:00 PM EDT. Visit BourbonandBeyond.com for more details.

“If you could capture America in a bottle, it would be a bottle of bourbon. It’s a uniquely American creation, like jazz and baseball, and its beating heart is in Louisville,” says Bourbon & Beyond producer Danny Wimmer. “This connection to the past has transformed Louisville into a city of the future. One of the most vibrant and diverse food scenes in the country has grown around bourbon’s resurgence, and we tried to mirror that spirit with the great music lineup that we put together. I can’t wait for people to visit this city in September and experience something that goes far beyond their preconception of what Louisville is.”

Held during Bourbon Heritage Month, Bourbon & Beyond also celebrates the craftsmanship behind award-winning spirits, master distillers and world-class chefs. Bourbon author, Amazon Prime host (Bourbon Up) and expert Fred Minnick has curated one-of-a-kind tastings and seminars celebrating Louisville’s world-renowned distilleries, while culinary curators Edward Lee (The Mind of A Chef) and Anthony Lamas (Seviche and Southern Heat) will team up to arrange special food experiences that will be announced soon.

Produced by premier independent festival producer Danny Wimmer Presents, the third annual Bourbon & Beyond will be held at a new festival location, the Highland Festival Grounds At KY Expo Center. All of DWP’s Louisville festivals will take place at the new venue, including the first-ever Hometown Rising Country Music & Bourbon Festival (Sept. 14-15) and Louder Than Life (Sept. 27-29). Fans interested in attending all three weekends can purchase a special Trifesta Pass, which allows General Admission weekend access for the discounted rate of only $229.00 plus fees. Visit trifestapass.com for more information.

The current music lineup for Bourbon & Beyond is as follows (subject to change): 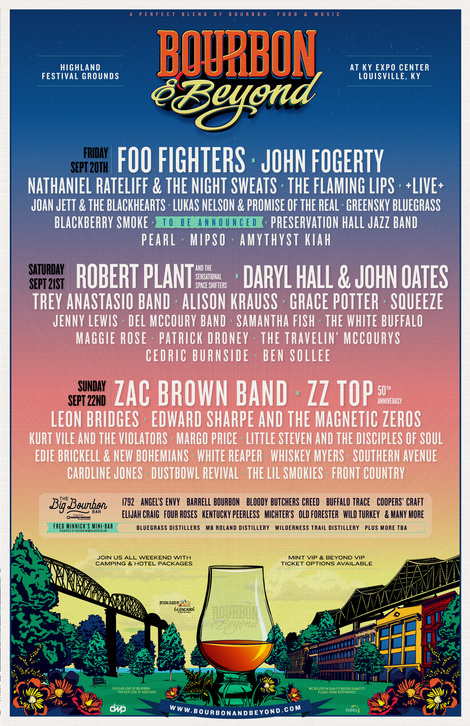 The initial list of participating chefs at Bourbon & Beyond includes:

Ticket prices for Bourbon & Beyond will be as follows:

The Highland Festival Grounds At KY Expo Center are located at 937 Phillips Lane in Louisville, Kentucky. Festival doors open at 11:00 AM daily.

For more information on Bourbon & Beyond please visit:  BourbonAndBeyond.com