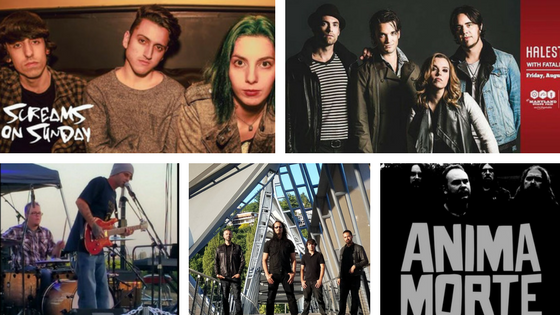 Hold on tight because this final stretch of summer is going to be a banger. We’ve stumbled upon some killer new bands for this month’s “Social Roundup” and legitimately think that if you’re not tuning in, you’re doing yourself a disservice. From LA to Brazil, let’s take a trip and listen to some of the best rock on the planet from both near and far.

Screams on Sunday makes us want to scour the entire country of Spain for killer rock music because these guys are a tour de force in alt-rock. The band is coming in hot with a new single “No Room to Escape” and a lyric video to go along with it. Their upcoming album was recorded at Sound-Hub Records (Belper, UK) and mastered in Metropolis Studio (London, UK) where artists of the likes of Blur, The Sex Pistols, and more have laid down prominent works. Aside from Patty’s haunting vocals, “No Room to Escape” has “social and political themes that makes us wear the refugee’s shoes that are forced to emigrate to The West. The leitmotiv that leads their way is being honest with themselves and offering the public the most sincere version of their work, no need for paraphernalia.” We can’t wait to see what else is in store for this deep and eclectic group.

We’re digging this “Rock band from the streets of Charm City.” The group’s latest single, “Damn Your Eyes” is raw and powerful, yet has a catchy hook that will stay stuck in your head (in a good way). It emphasizes that although you may walk your own path in life, it can be easy to be pushed and pulled in different directions with emotions that constantly fluctuate. As told on their Facebook page, the band has a storied history full of past projects, veering away to embark on different journeys, and then reconvening with the music stronger than ever. Hoping these guys announce a national tour sooner than later.

We’re all about the dichotomy Blue Helix exhibits in so many different ways. They have members who hail from both Seattle, WA and San Paulo, Brazil. They’re equal parts neo-prog and acoustic folk. If you’re a fan of music that doesn’t fit to the confines of a certain genre, turn up your speakers. They have an “official” music video out for a single entitled “Aliens,” but we’re digging the live footage of their song “Escape” that shows off their harder side of things. Their latest album “A Tale of Two Halves” is out now and the band has a hometown show in Seattle on the 26th we’d highly recommend scooping tickets for.

Well, this is interesting. As we were wrapping up our blurb about recently falling in love with the dark bluesy vibe of Russian Money, we visit their Facebook page and come to find out they had ended their career as a band. We featured the song “Somebody Died” on our “Bitchin’ New Discoveries” Spotify Playlist and loved its depth and emphasis on how a natural part in the life cycle can breath life, music, prayer, and more into those it affects. Lead singer/songwriter Ryan Dean is currently in a predicament to buy the rights to his music back from the record label and has started a GoFundMe page here. Whether in a band or as a solo act, Dean is a true display of talent, so if you have a few bucks to chip in, we recommend this worthy cause.

On the surface, “horror music” might sound like a super cheesy genre that lacks any kind of depth beyond novelty and irony. We invite you to shut up those preconceived notions and throw on some Anima Morte. As described on their website, “Swedish instrumental quartet ANIMA MORTE plays music inspired by the classic Italian horror and giallo soundtracks like Zombie, The Beyond, Suspiria. With their roots in classic progressive rock they make perfect use of Hammond organs, Mellotrons and Moogs to create a creepy and haunting atmosphere.” They have an upcoming collaboration with Italian composer Fabio Frizzi that you can view at the link above. It’s the epitome of fire meets fire and you can consider us new fans for life.

Join us in our quest to discover new music on our social channels. We have followers who pimp their friends’ bands, bands sharing their own tracks, and we stumble upon some good shit on our own.  To share your music or your latest favorites, make sure to tweet at us @zrockmusic or drop us a line on our Facebook wall.