The eighties. A revolutionary decade which would shape and form heavy music for years to come. In this fruitful decade, WatchTower, from Austin, Texas, were pioneering in a genre that was to become progressive metal. Headway Festival features the European premiere show of WatchTower’s long-awaited reunion on Saturday, April 3, 2004 in Amstelveen, Holland.

In 1986, Fates Warning released their classic Awaken the Guardian , and then went to explore new directions with No Exit . In 1987, Mekong Delta spawned their self-titled album, followed by the album The Music of Erich Zann (1988). Majesty (the early Dream Theater) were recording their demos, and When Dream and Day Unite would not be out until 1989. We would have to wait until 1990 for Psychotic Waltz’s A Social Grace . And before all these and other progressive metal milestones, there came WatchTower with their groundbreaking debut Energetic Disassembly .

After their second masterpiece Control and Resistance , the legendary tech metal band surprisingly disappeared out of sight. Until 1999, when the original members reunited for the first time in ten years to record the Accept-song Run If You Can for a tribute album. And in 2002, ’demonstrations in Chaos came out, an album offering rare and unreleased recordings featuring original vocalist Jason McMaster. It appeared to be a prelude of their upcoming new and long-awaited album Mathematics , which will be released in 2004. The Texas tech metal pioneers are back! And we’re very proud to have them headlining Headway 2004.

Commented WATCHTOWER guitarist Ron Jarzombek: WATCHTOWER just played the Headway festival in Holland, and we also did a show here in San Antonio. I had a great time visiting Holland again, but we all had a better performance at the show in San Antonio. Well, all except for the last 15 seconds of the show when I dislocated my left knee… OUCH!!! We were at the tail end of 2112 when [singer] Jason [McMaster] was about to do the Attention, all planets on the solar federation, we have assumed control. Instead, he said something like ’somebody call an ambulance, Ron broke his leg. Classic stuff!… Many thanks to the people who have emailed me asking if I’m OK. Well, I just played a gig tonight with my cover band DRAGONFLY at Sunken Gardens (3,000 in attendance) with a brace on my left knee and we had a fabulous time. It was a really cool gig! Yeah, I had to modify a few moves but by next week, the knee should be back to normal. All is cool!…

One thing that I want to mention about WATCHTOWER getting together for these reunion gigs every several years. WATCHTOWER will not play live again until there is another CD released (I don’t even want to say the name of the next CD because we’re all tired of hearing it). That’s what I should have said months ago when everyone was so gung-ho on doing the Headway festival and other possible local gigs. It’s not that I didn’t have a great time hanging out and playing live with Jason, [bassist] Doug [Keyser] and [drummer] Rick [Colaluca] in Holland and San Antonio this past month (OK, the knee dislocating wasn’t much fun), but I’m tired of living in the past with these guys. When we were in Holland we talked extensively about what it would take to complete the CD, and now it’s time to do something about it. Either we get the next CD done or we are totally over. And I want you guys to quote me on this. No new TOWER CD, no more ’reunion gigs. Doug and I have been keeping in touch nearly every day, talking about tunes, arrangements, lyrics, recording, etc… so keep your fingers crossed. This might come together after all… 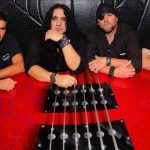 WICKED GARDEN Releases Official Music Video for “Over and Done”!