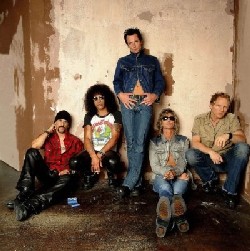 Weiland, Slash, McKagan, Sorum and Kushner are revered as five of rock’s most valuable players. Their illustrious careers are highlighted by an astonishing run of chart-topping gold and platinum albums, major industry awards, critical acclaim and music of monolithic power. Together they’re making rock history with a lineup of unparalleled artistic and commercial success.

This is a milestone signing for RCA. Velvet Revolver is distinguished by not only its powerhouse musicianship but also by its new material. The songs I’ve heard will propel this group to the very forefront of rock music today, said Clive Davis, Chairman/CEO RCA Music Group.

We’re thrilled to partner with RCA Records and its legendary chief, the enigmatic Clive Davis, says Velvet Revolver. We believe this marriage will be a loyal, dedicated and fruitful relationship not based solely on business, but instead on the thing that once dared us all to dream-music.

This past summer, Velvet Revolver fired its first shot at a celebrity-filled El Rey Theater in Los Angeles. The all-star group garnered rave reviews. The band is currently in the studio doing pre-production work for their upcoming RCA debut.

Velvet Revolver have selected Slither as the first single from their forthcoming debut album, Contraband , due on May 11 through RCA Records. You Got No Right , the mellow, Beatles-esque ballad the group performed at the Smashbox Fashion show last October, is believed to be a strong candidate for the album’s second single. Other tracks set to appear on the CD include Trainsucker Blues , Headspace , Falling to Pieces , Superhuman , and Illegal Eye

The band, who are in the middle of doing international press in Los Angeles, are said to be preparing to embark on a six-week promotional jaunt beginning in early March. In addition to doing more press at each stop, the band are expected to perform a short set at a local venue in each city.

The following is a tentative/preliminary list of dates and cities where Velvet Revolver are expected to play as part of their promotional tour:

Slash and Duff recently completed a European press/media tour to promote VELVET REVOLVER’s upcoming debut album, Contraband , due on June 8 through RCA Records. The band will shoot a video for the album’s first single, Slither , on April 4. 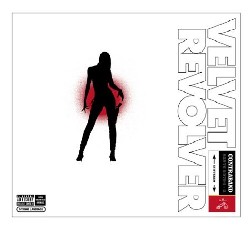 Velvet Revolver smuggles its debut album Contraband right into the top slot on The Billboard 200. In its first week, the rock supergroup’s RCA set sold 256,000 copies in the United States, according to Nielsen SoundScan.

Are they actually doing this promo tour? Isn’t Scott Weiland in jail or rehab or something? I thought I read that he got a day out to be able to shoot a video just the other day. – said lugnut on Apr 04, 2004

If you go to their official site, you can listen to their FULL first single. http://www.velvetrevolver.net/home/home.asp The song is called Slither and it ROCKS! Guns N Roses vibe guitar and Scott sounds terrific on it! – said theloudestrock on Apr 04, 2004

this band will go far if they can keep there singer off drugs. 😈 amen to that! lets hope this is scott’s wake up call! – said theloudestrock on Apr 04, 2004

Vocalist Scott Weiland, who has has spent the past several months in a court-ordered drug rehabilitation center after pleading no contest last year to heroin possession, been cleared by California authorities to tour with his bandmates in VELVET REVOLVER, according to Billboard.com. Scott actually just got cleared to tour today, VELVET REVOLVER guitarist Slash (ex-Guns N Roses) told the magazine. We’ve been planning dates this whole time. If everything goes according to plan, VELVET REVOLVER will be playing medium-sized places leading up to the June 8 release of their RCA debut, Contraband . The first thing we’re going to go out and do is establish ourselves as our own band in our own environment, Slash told Billboard.com. We’re trying to keep it as personal as possible but at the same time, expose ourselves as much as possible. We want to do this on our own terms, as opposed to going out, jumping on the road and opening for somebody, or playing a festival bill, but that is coming. According to Slash, fans can expect a host of tracks from Contraband in addition to a little bit more GUNS [N ROSES] and [STONE TEMPLE PILOTS, Weiland’s former band] than just one song a piece, and a couple of covers. [We ll do] whatever we can to make a really good, punchy set and express ourselves as openly and as uninhibitedly as possible. – said lugnut on Apr 04, 2004

How friggin great is it to see a rock band at #1 again!?!? This is a good sign I think for rock becoming mainstream again. Not the Headbangers Ball 2 rock/metal generation. This CD though is a gem! If you haven’t gotten it, what are you wating for! It is so good! I love hearing the GN R elements with the STP vocals. Very very cool! – said theloudestrock on Jun 06, 2004

YEP… . Proof that rock still lives! I just hope everyone keeps their head’s screwed on straight! This is proof the rock scene is NOT DEAD and that people still believe in KickA** rock music! If Slash isn’t gonna continue with his Snakepit project and GNR will never re-form… ..I suppose this is the best scenario! It’s great!! – said brich68 on Oct 10, 2004