Georgia based hard rock / metal band THEM DAMN KINGS have announced that they have been added as support on LA alternative metal band Gemini Syndrome’s upcoming US tour. The first leg of the tour will feature direct support from Ovtlier, and on the second leg from Oh! The Horror. Also joining the tour are punk upstarts Pushing Veronica. All tour dates are listed below.

Tickets for all shows are available at: GeminiSyndrome.com

“We are so F@#!’n ready to hit the road with Gemini Syndrome, it’s been far too long since we’ve been able to bring you guys pure unadulterated rock n fk’n roll!” says vocalist / guitarist Jef Rhodes. “No more pandemivision! No more BS! See all of you down the road!”

THEM DAMN KINGS will be road testing songs from their as-of-yet unreleased debut album Rise Up. The album features the tracks ‘Throw It Away’ and ‘Yesterday’ which were released to US metal radio late last year, and saw the band conquer the national Metal Contraband radio charts. As a special bonus for fans, the band will be selling a limited number of advance CDs of the Rise Up album online, and at all shows while on the tour. CDs will be available online at the band’s merch store: https://them-damn-kings-.ecwid.com

Rhodes adds, “After almost two damn years I’m excited and proud to finally announce our album Rise Up is available for your listening displeasure. I’m beyond excited for you guys to hear the record and even more excited to be bringing you a taste of the album to the stage!”

THEM DAMN KINGS is the hard rock wrecking machine created by guitarist / multi-instrumentalist / vocalist Jef Rhodes. Jef is a long time professional Front Of House engineer, and backline tech who has over two decades of international touring experience with such bands as: Opeth, Cradle of Filth, Highly Suspect, Lacuna Coil, Watain, Mayhem, and others.

By enlisting former Lacuna Coil drummer Ryan Folden, the pair have recorded RISE UP, a monster of a debut album that sounds both new and exciting – while simultaneously reminding listeners of that golden age of the early ‘90s when Hard Rock, Metal, and Grunge ruled the late night rock clubs of the world.

A debut single “Throw It Away” was released in October 2020. “It was the first song written for the record. It makes me wanna get on a motorcycle and ride even though the song has nothing to do with that.” says Jef. “It’s about tossing away your fears in an abstract sort of way.” The track was quickly followed by anthemic ‘Yesterday’ which garnered the band their first international radio play, and media support.

Jef has assembled a killer live band – and the group are ready to hit the road! 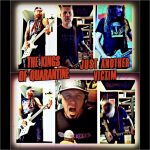 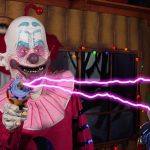