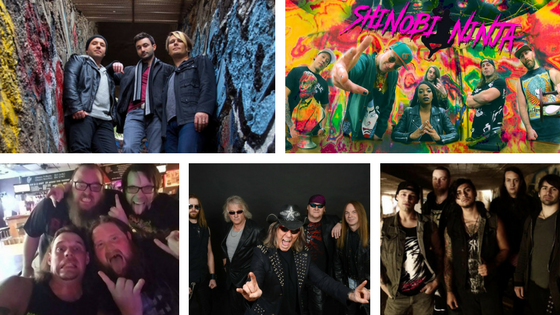 As you know, here at ZRock, we also like to put the spotlight on artists that may not be a household name that we stumble upon through suggestions on social media. This July is a particular scorcher when it comes to our “Top 5 Social Roundup.” Listen and take notes!

We have to preface that sometimes we kick our own asses for not knowing about artists like Ships Have Sailed sooner. They have been doing the damn thing for a minute and we’re not claiming to “discover” them the same way some assclowns claim to have “discovered” Annie Lennox (read this if you want to laugh/shake your damn head). While “Up” is a little more mellow than a lot of stuff we listen to, we love everything about this tune—uplifting piano chords, poignant and positive lyrics, and a sunny lyric video to accompany it. It boasts “All we know is we’ve gotta stand up” which is a perfect summer anthem for those who are ready to set out to conquer their dreams no matter how crazy and chaotic their paths become. For our followers in LA, they will be playing on the 13th at Good Vibes & High Fives Hotel Cafe and you should totally go.

Shinobi Ninja is another band we wish we had pumping through the speakers earlier in life. They are a name that always pops up on our feed and we realized that tons of personal friends on Facebook “like” them—and our friends have good taste. 😉 They classify themselves as “Rock Hood,” which may raise eyebrows, but the thing we’re digging most about this group is that they can appeal to folks from diverse musical walks of life. The opening guitar riff in “Programmable Animal” has an air of early 00s pop punk nostalgia to it. Vocalist Baby G’s vocals are ethereal during hooks and then rival any current female MC’s flow as she rhymes later in the song. Now that we’re on the Shinobi Ninja train, we hope they tour soon so we can see this eclectic group live stat.

It’s (literally) music to our ears when a band kicks ass both musically and lyrically. This was the first thing that popped into our minds upon listening to As Days Fade’s “Resurrection.” The intro is solid with both rhythmic and lead guitar parts that seamlessly pass the torch to Blake Thomas who takes over with commanding vocals. Our favorite part of the song is the breakdown that is extremely reminiscent of Bach’s “Toccata and Fugue in D Minor.” We don’t know if it’s intentional or not—and we can’t decide if it would be cooler if it is a coincidence or not. Maybe if we’re lucky they’ll tweet @ us and fill us in. 😉

We know Helix has been around for a grippe and it’s certainly not their first rodeo. They’ve been doing their thang since 1974. As vocalist Brian Vollmer describes on Heavy Metal Mansion, “From as early as 1983 we’ve been writing heavy songs but with sing along choruses” in order to make sure they weren’t tied to the tired bar circuit and were a little more “top 40”-friendly. From the second we pushed play on their newest song, “The Devil is Having a Party Tonight,” we knew we were in for a wild ride as the decapitated video-game like character invites everyone to “Step right up, the party is about the begin.” If you’re going to watch one music video this week, make it this. The chorus is catchy as all hell and we want to jump into this game land ourselves to rage with these guys.

We asked our audience of music lovers what was blaring through their speakers and these guys shared their cover of Men Without Hat’s “Safety Dance” with us. For those of you who consider this song to be a guilty pleasure, but aren’t ready to come out and say you love the 80s hokiness, this cover will please your palate. Synths and drum machines are replaced with real-ass guitars and a no frills drum beat. We love covers that don’t f*** with the original to the point of being gimmicky, but rather, are authentically replicated by the artist paying equal parts homage and equally honor roots of their own. South of Sorrow does just that and you can bet your asses we’ll be checking out their original tunes ASAP.