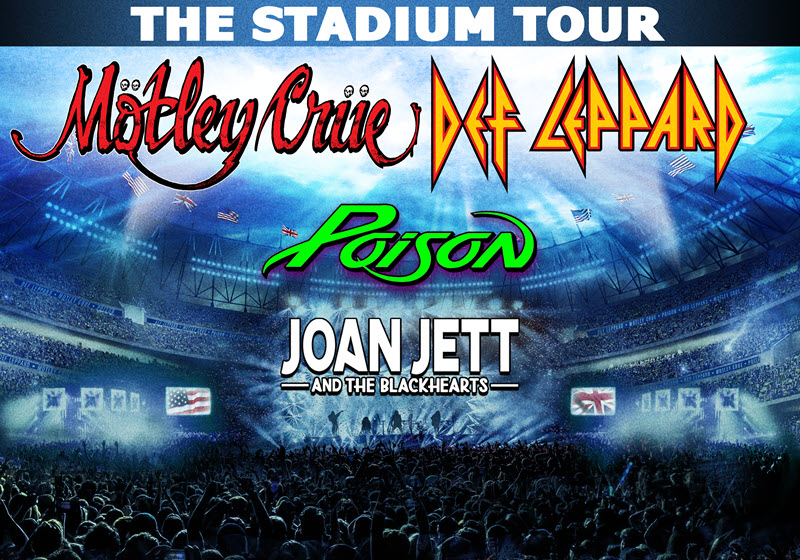 7 new dates have been added to The Stadium Tour featuring Mötley Crüe, Def Leppard, Poison, and Joan Jett & the Blackhearts.  The tour now kicks off June 21 in San Antonio.

With over 700,000 tickets sold and gross box office receipts of over $90 million in the first weekend of sales, The Stadium Tour featuring Def Leppard and Motley Crue with Poison and Joan Jett & The Blackhearts will be the biggest rock tour of 2020.  The tour saw the fastest sell out in Miller Park history in Milwaukee with additional shows selling out instantly in Atlanta, Seattle, Charlotte, Dallas, Pittsburgh, Detroit, Chicago and Denver.  The bands responded to the unprecedented fan demand by announcing seven new shows will be added in all new cities:  San Antonio, Kansas City, St. Louis, Minneapolis, Nashville, Cincinnati and Cleveland.  The added tour dates will begin pre-sales January 6 –  check local venue listings for more details.

“The word on the street was that fans were overly excited about this stadium tour even before it was announced … well it’s out there now & it keeps getting bigger & bigger … this is going to be a MONSTER of a tour!”  says Def Leppard’s Joe Elliott.

Added Mötley Crüe bassist Nikki Sixx “Little did we know that making The Dirt movie would lead us to this exciting new place touring stadiums with our friends in Def Leppard. We are beyond excited for this tour to begin”.

Poison’s Bret Michaels also added “There are not enough words to thank the three generations of fans for making this such an exciting, record breaking, historical tour with the fastest sell outs in history at these stadiums”.

Following the huge success of their Netflix biopic The Dirt, Mötley Crüe has seen a massive surge in new audience with fans around the world demanding the band tour again. This lead to the band members reuniting and announcing that “Mötley Crüe is back” just recently. While The Dirt caused a meteoric 350% increase in streams of Mötley Crüe’s music across all platforms and the younger 18-44 demographic now represents 64% of the band’s fanbase most of the new fans have never seen any of the band’s legendary live shows that Crüeheads have relished for close to 4 decades. Mötley Crüe is also celebrating the 30th Anniversary of their #1 charting, 7x Platinum album, Dr. Feelgood this year.

Def Leppard are one of the most important forces in rock music. Over the past year, the icons closed out a sold-out worldwide tour including a North American stadium run & headlining the UK’s Download Festival to 90k screaming fans. Def Leppard’s star continues to rise and prevail. The band have amassed a staggering 2.5 billion streams since releasing their music digitally last year. Def Leppard’s influential career crosses generations and includes numerous hit singles and ground-breaking multi-platinum albums—including two of the best-selling albums of all time, Pyromania and Hysteria, both of which are certified Diamond (10x platinum).

Poison will be bringing a rocking real and relevant no holds barred thunderous live show to the Stadium tour this summer with the all original lineup of Bret Michaels,C.C. DeVille, Bobby Dall and Rikki Rockett. Poisonwill be unleashing an onslaught of hit after hit songs in its set.  Poison is known to bring a unique style of passionate high energy, sincere gratitude and a positive attitude.  Michaels engages all the fans and makes it an absolute epic ride of true live music.   Together With C.C.Deville on guitar, Bobby Dall on bass, and Rikki Rockett on drums Poison will rock the stadium with a chemistry that will bring a big summer mega party vibe and Michaels promises to give 1000 % on the stage as the hotter it gets the harder Poison promises to rock!!!

Joan Jett & The Blackhearts are no strangers to stadium sized shows having toured with The Who, Green Day and the Foo Fighters in recent years on their stadium tours.  Jett celebrated the story of her life in a critically acclaimed 2018 documentary Bad Reputation which showcased all the female firepower of her life and musical career.

With more than 100 million albums sold worldwide, the 2019 Rock and Roll Hall of Fame inductees with two prestigious Diamond Awards in the U.S., Def Leppard-Joe Elliott(vocals),Phil Collen (guitar), Rick “Sav” Savage (bass),Vivian Campbell (guitar)and Rick Allen(drums) – are one of the most important forces in rock music. The band have amassed a staggering 2.5 billion streams since releasing their music digitally only one year ago. As they did with the original release of their records, Def Leppard dominated the worldwide charts again. Chart stats saw their albums charting in the iTunes Top 10 in more than 30 countries, including Hysteria at #3 in the US, and #5 in the UK. Def Leppard had the #1, #2 and #3 records on the US catalog albums chart.

Over the course of their career the band has produced a series of classic ground-breaking albums that set the bar for generations of music fans and artists alike. The group’s spectacular live shows and arsenal of hits have become synonymous with their name, leading Def Leppard to be heralded as an institution in both the music and touring industry. Def Leppard’s influential career includes numerous hit singles and ground-breaking multi-platinum albums—including two of the best-selling albums of all time, Pyromania and Hysteria, capturing the group’s legendary tracks, bringing together classic Leppard hits such as “Rock of Ages”, “Pour Some Sugar on Me” and “Foolin.” The band’s 2015 self-titled studio album debuted at #1 on Billboard’s Top Rock Albums and Top Independent Albums charts. The album also took the #5 spot on Billboard’s Top Current Albums and #10 spot on the Top 200, as well as claiming 15 top 10 debuts around the world.

Hailing from Los Angeles, CA, the quartet—Vince Neil (vocals), Mick Mars (guitars), Nikki Sixx (bass), and Tommy Lee (drums)— has commandeered the rock pantheon for 38 years. They’ve accumulated worldwide album sales exceeding 100m, 7 platinum and multi-platinum albums, 22 Top 40 mainstream rock hits, 6 Top 20 pop singles, 3 GRAMMY nominations, 4 New York Times best-sellers and even landed a star on the Hollywood Walk of Fame. With utmost success from their biopic, The Dirt on Netflix and its soundtrack, the band landed another #1 album on iTunes and Top 10 worldwide with 22 chart-topping singles and 7 albums on the charts. Its massive global success saw Mötley Crüe’s popularity rush to new highs, catapulting the band’s music back to the top of the worldwide charts with the younger 18-44 demographic now representing 64% of the band’s fanbase.

In the six months following the release of The Dirt, Mötley Crüe has celebrated a meteoric rise of almost 350% increase in streams of their music across all streaming platforms. Known for their iconic live performances, they’ve sold-out countless tours across the globe in front of millions of fans with groundbreaking production highlights such as Tommy Lee’s, Crüecifly-Drum-Rollercoaster and Nikki Sixx’s Flame-Throwing-Bass. The band concluded their extensive two-year final tour in 2015 after 165 shows across 5 continents, grossing over $100m.

In its all original line up Poison (Bret Michaels, C.C. DeVille, Bobby Dall, Rikki Rockett) has kept it rocking, real and relevant and promises they will bring their own style, unbelievable live energy and big hit songs to the stage this summer. Relentless from the ground up and forged in the hell fires of the Pennsylvania and Los Angeles club scenes, they smashed their way up as an independent band who bet on themselves. Selling over 3 million copies of an independent album which included the big hits “Talk Dirty To Me”, “I Won’t Forget You”, “Cry Tough”, “I Want Action” and the underground smash “Look What The Cat Dragged In” they were soon picked up by Capitol Records and beat the sophomore jinx by releasing the #1 smash “Every Rose Has Its Thorn”. Written out of emotion by singer/songwriter and frontman Bret Michaels, the song blasted into the charts remaining a top the pop, rock and country genres for 3 months consecutively. The album “Open Up and Say…Ahh!” sold 8 million copies out of the gate and spawned other hit singles, “Fallen Angel”, “Nothin’ But A Good Time” and “Your Mama Don’t Dance”. Followed up by the multi-platinum album “Flesh & Blood” Poison again lit up the charts with several more smash hit singles including “Unskinny Bop, “Something To Believe In” and more!

Friday the 13th will be a historic date for two reasons, the Stadium Tour tickets will go on sale plus Poison frontman Bret Michaels, a lifelong Type 1 juvenile diabetic will receive his recently awarded Humanitarian Of The Year award for his philanthropic work on The CW. Bret Michaels continues to celebrate our veterans and first responders on-stage nightly keeping all politics aside, just respect for these heroes. With a long list of big hit TV shows including multiple seasons of Vh1’s highest rated show “Rock Of Love,” which brought all the Poison hits to a new generation of fans, and NBC’s “Celebrity Apprentice , Michaels vows on behalf of his band that they will bring the live, raw and real energy that is synonymous with Poision to the stage with all their biggest hits this summer along with an incredible VIP meet and greet and photo experience that all their fans have come to know.

Joan Jett is an originator, an innovator, and a visionary. As the leader of the hard- rocking Blackhearts, with whom she has become a Rock and Roll Hall of Fame inductee, she’s had eight platinum and gold albums and nine Top 40 singles, including the classics “Bad Reputation,” “I Love Rock ‘N’ Roll,” “I Hate Myself For Loving You,” and “Crimson and Clover.” Her independent record label, Blackheart, was founded in 1980 after she was rejected by no less than 23 labels. Blackheart is one of the longest running indie labels and continues to give voice to new bands. As a producer, she has overseen albums by Bikini Kill, Circus Lupus, as well as the Germs’ LA punk masterpiece, GI. Jett’s music has become a permanent force in mainstream culture. Jett and the Blackhearts released their latest record, ‘Unvarnished,’ in 2013 and continue touring the globe with headline shows alongside fellow rock icons like The Who, Green Day and the Foo Fighters.

Jett has acted and appeared in movies & television, including the film Light Of Day. Jett was also able to see her story told in The Runaways, the film based on (lead singer of The Runaways) Cherie Currie’s book Neon Angel, starring Kristen Stewart as Jett, and Dakota Fanning as Currie. Jett was close to the project, serving as executive producer. In January 2018, the documentary film based on Jett’s life, “Bad Reputation,” – produced by Blackheart’s SVP Carianne Brinkman and directed by Kevin Kerslake – premiered to critical acclaim at the 2018 Sundance Film Festival, with the New York Post hailing that “‘Bad Reputation’ does it right, tracing Jett’s trailblazing path as one of the first, and still the hardest-rocking, woman.” 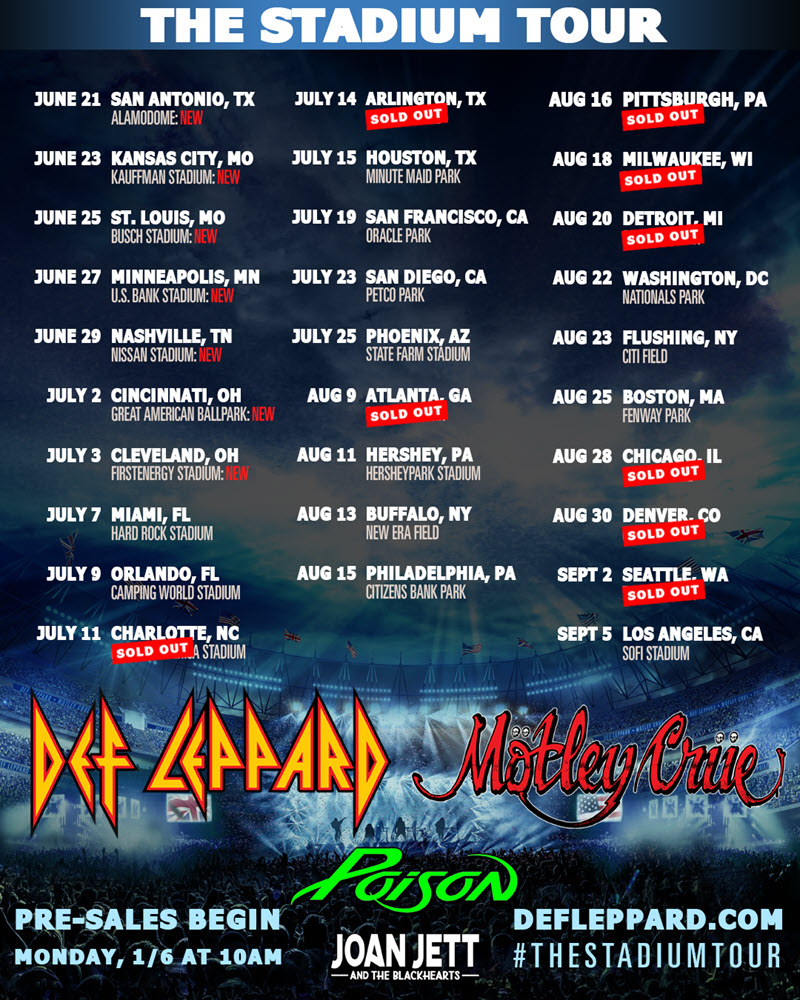