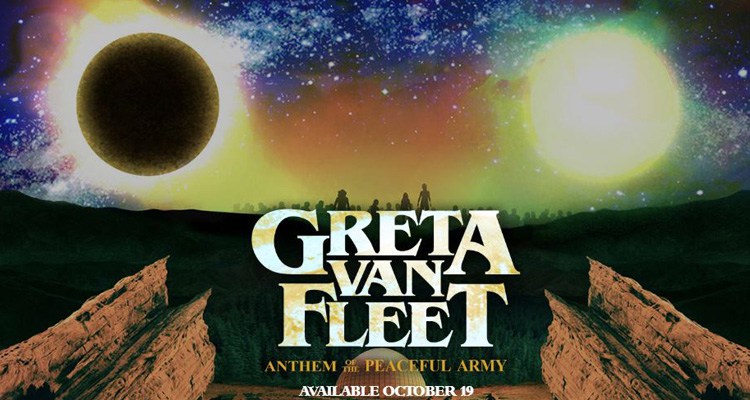 Congrats to Greta Van Fleet as their full length debut album Anthem of the Peaceful Army  enters the Billboard Top 200 Albums chart at #1.  The album also came in at #1 on  Billboard’s  Top Rock Albums and Rock Consumption charts, and #3 on Billboard Top 200 chart.  In addition, the album made impressive international debuts:  #1 in Canada, #3 in Germany, Top 10 in Australia and New Zealand, and Top 15 in the UK.

The music video for first single from Anthem of the Peaceful Army, “When The Curtain Falls,” has surpassed 5 million views.

“Music has always been a centerpiece in all four of our lives,” said the band’s Jake Kiszka,  “even when we were very young, when we first started hearing our parents’ blues, folk, and R&B records.  So to be able to create the music we love, that so many people are hearing and responding to, is truly an honor.”

Anthem of the Peaceful Army was produced by Marlon Young, Al Sutton and Herschel Boone (The Rust Brothers) and recorded earlier this year at Blackbird Studios in Nashville and Rustbelt Studios in Royal Oak, Michigan.

Since the March, 2017 release of “Highway Tune,” the band’s first single that claimed the #1 spot at Rock Radio for five consecutive weeks, the four members of Greta Van Fleet – Josh Kiszka/vocals, Jake Kiszka/guitar, Sam Kiszka/bass and keys, and Danny Wagner/drums – have been on a wild ride of sold-out concerts in North America and Europe, racked up millions of YouTube video plays and audio streams, recorded two #1 EPs, received glowing accolades from iconic artists like Elton John, Dave Grohl and Joe Satriani, and most importantly, have been building an extraordinary connection with their fans.